Home Exhibitions Exhibition archive To be Yourself, to create. Ioana Grigorescu – architect and visionary

To be Yourself, to create. Ioana Grigorescu – architect and visionary 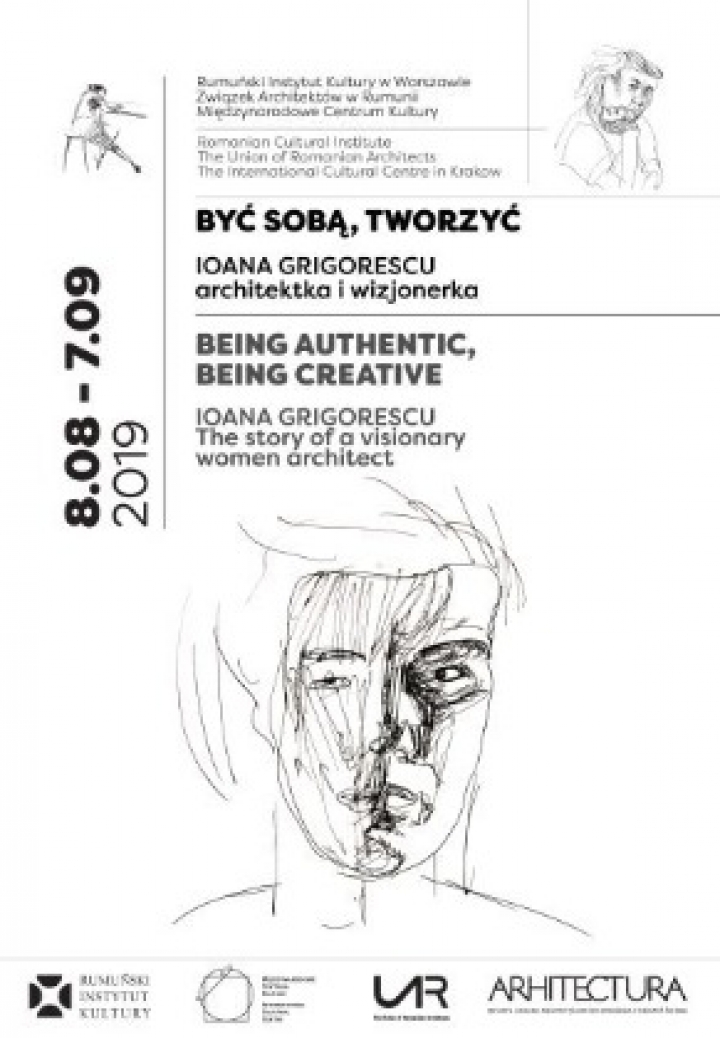 Gallery opening hours: From Tuesday to Sunday, 11 a.m. – 7 p.m.
The last entrance to the exhibition at 6.30 p.m.
Ticket prices: Free entrance
From 8 August until 7 September 2019 the Romanian Institute of Culture in Warsaw in cooperation with the Association of Romanian Architects (UAR) and the International Cultural Centre in Krakow (ICC) will host an exhibition dedicated to the work of the Romanian architect Ioana Grigorescu.

Ioana Grigorescu (b. 4 March 1915, d. 13 November 2006), graduated from the Faculty of Architecture in 1941, and was awarded a magna cum laude degree in architecture in 1947 for an avant-garde design of a school of architecture and urban planning. From 1955 onwards she worked in conservation and restoration of monuments of architecture. She soon became one of the most celebrated specialists in this field, combining tradition and modernity while also retaining exceptional artistic refinement and professional skill. Over the course of about fifteen years she realised multiple designs in Bukovina and in northern Moldavia. Among her major works, completed before she retired in 1972, are:
– monastic cells at Dealu monastery in Târgovişte (1955);
– Humor monastery (1960-1971), Vasile Lupu church and tower;
– Voroneț monastery (1960-1961), church, museum, and the custodian’s house;
– Suceviţa monastery complex (1960-1970), including church at the graveyard and bell-tower;
– Dragomirna monastery complex (1961-1971), including church at the graveyard;
– Putna monastery (1966-1972), treasury tower and church;
– Slatina monastery (1960-1972), three keeps in the wall around the monastery;
– Secu monastery (1963-1972), church, western part of the wall with Mitrofana keep, a wing for guests and one third of cells;
– Sihăstria Secului monastery (1966-1969), igumen’s (prior’s) house and part of monastic cells;
– Casa Dosoftei in Iași (1967).

Ioana Grigorescu, shaped by modern trends in architecture, consistently adhered to them in her practice regardless of the topic she addressed. Thanks to her talent and courage she successfully integrated preserved historic architectural elements with very modern complements or additions.
In complete contrast to the universally accepted tendency for adherence to original style of restored or rebuilt monument or its part, Ioana Grigorescu always implemented the idea of clear-cut division of historic elements and contemporary interventions so that there would be no doubt as to what is old and what is new, what had been restored or added, yet full harmony between the two would be retained. When dating was uncertain the architect strove to avoid recreating the lacking elements through analogy alone. In her renovation work Ioana Grigorescu followed her fundamental rules of honesty and authenticity. She defined them in the following way: “…it is like filling the missing pieces of an earthen jug with a different contrasting material. While looking at it the viewer feels pleasure at being able to tell the original parts from the fillings. And so, a future researcher or museum visitor become active viewers, critics of the reconstruction, fully aware of the original state of a historic object as well as of the accuracy or potential errors made by the conservators…”.

The exhibition features graphic works by the Romanian architect. The dominating, almost exclusive topic of Ioana Grigorescu’s prints is the human, particularly human face, featured in numerous portraits and more than a hundred self-portraits. The final ones make up a graphic diary of sorts where the author embraced her joys and sorrows. The same concern for psychological truth is expressed in her studies for portraits, which are often caricatures. Ioana Grigorescu was also interested in the human body – her archives contain numerous nude studies. As an exercise she also made copies of paintings of old masters, selecting those that presented a human figure. Landscapes and architecture rarely feature in her works, while still lives are completely absent.
Her works are made with a nervous and concise lines. Most of her drawings are composed of merely several lines, and few of them were made over a long period of time. Notably, there exist no works in more time-consuming techniques, such as oil painting. However, numerous sketches for architecture designs and restoration works are also true masterpieces.