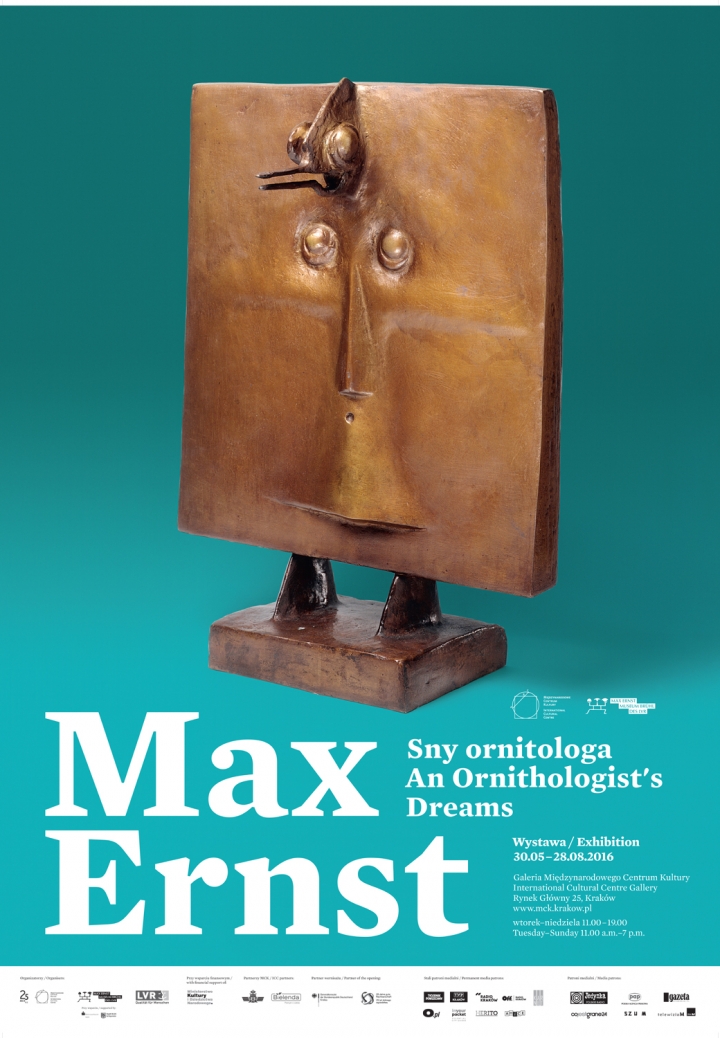 An Ornithologist’s Dreams is an exhibition of works by Max Ernst – one of the leading artists of the 20th century and, next to Salvador Dali, the most famous representative of Surrealism. The exhibition introduces the artist’s work through the prism of his deep conviction about his avian origin and his reference to birds as his artistic alter ego.

Bird is one of the leading motifs present in Max Ernst’s work, beginning with his early Dadaist pieces to those made by the end of his life. Given names such as Loplop, Hornebom, and Schnabelmax, birds feature in various disguises, forms, and contexts. Bird is the dominating motif in Ernst’s collages, oil paintings, prints, book illustrations, and sculptures.

Ernst was deeply convinced about his avian origin, nature, and “bird-like” facial features. He often whistled and gave with one eye his trademark “bird” looks. He insisted that he hatched out from an egg laid by his mother. In his view, a turning point in his life came with a traumatic event experienced as a fifteen-year-old boy, when he learnt about the birth of his sister Loni exactly at the time of death of his beloved bird, a pink cockatoo called Hornebom.

The motif of the bird that directs the exhibition narrative works also as a pretext to present the artist’s remarkable invention in experimenting with new artistic techniques (including collage, frottage, grattage, decalcomania, and oscillation), as well as the role he played in creating important trends in 20th century art, such as Dadaism, Surrealism, and allusive abstraction. The exhibition both presents Ernst’s diverse artistic output (in printmaking, painting, publishing, and sculpture), as well as employs documentary photographs and fragments of his texts to illustrate his outstanding personality.

Unique works by Max Ernst featured at the exhibition come from the collection of Max Ernst Museum in Brühl (Germany), which is the co-organiser of the exhibition. The latter is supplemented with two works by Ernst from Polish collections: an oil painting “Sun and Forest” (1928) from the Museum of Art in Łódź, and a collage for a volume of poetry by Jan Brzękowski, titled “Tightened around the Lips,” (1936) from the National Museum in Krakow.

HAPPY HOUR – entrance to the exhibition for just 1 PLN.
Every Tuesday and Wednesday between 11 a.m. and 12 a.m.

Cinema on the ICC rooftop


HAPPY HOUR – entrance to the exhibition for just 1 PLN.
Every Tuesday and Wednesday between 11 a.m. and 12 a.m.

Cinema on the ICC rooftop

The book takes a look at the works of Max Ernst through his deep...
79.00 PLN
30.00 PLN
Add to cart
Publishing
×
added to cart:
continue shopping go to shop go to cart