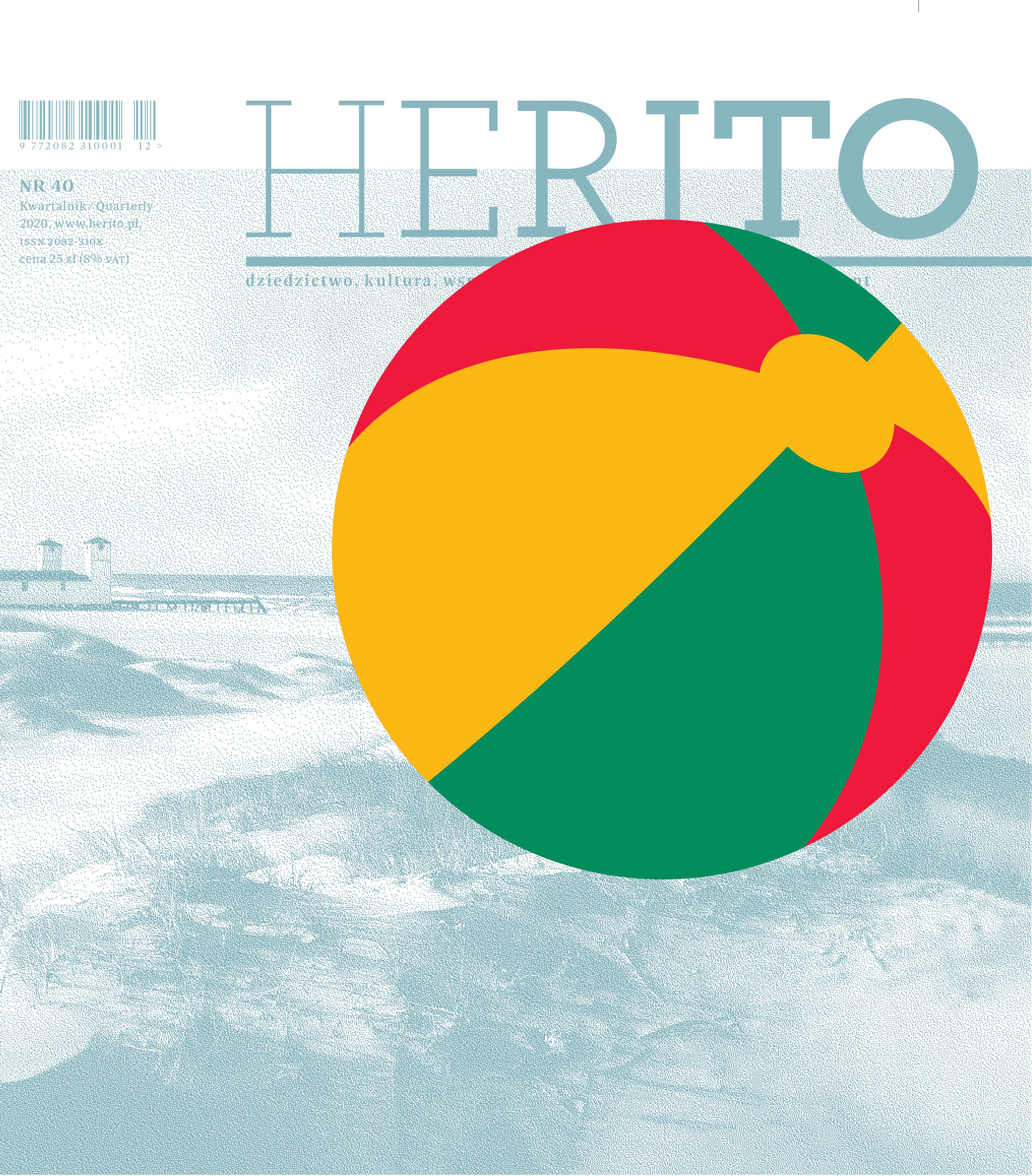 Issue of HERITO quarterly devoted to Lithuania, its culture, heritage, and history.
What do we know about the culture of Lithuania? What is the nature of its connection to the Baltic? To what extent is it defined by its links with Central Europe, Eastern Europe, and Scandinavia? Why is Lithuanian culture so democratic? Where do the Lithuanian vitality and ecological sensibility originate? – these are some of the questions addressed in the 40th anniversary issue of HERITO quarterly.

In spite of the stereotypes established in Poland – those of the pagan Lithuanian forest or the tropes of Mickiewicz and Miłosz – the authors look at Lithuania from an unusual side, from the sea. That is why they write more about the Curonian Spit, Palanga, Nida and Klaipeda. Having reached Vilnius, they suggest a different journey – in search of less known monuments than those along the beaten track to the Gate of Dawn, choosing Jan Krzysztof Glaubitz, Wawrzyniec Gucewicz and Mikalojus Vorobjovas as their guides.

The guides also include prominent Lithuanian intellectuals: Leonidas Donskis – who looks at Klaipeda the way Mann once portrayed Lübeck – and Mindaugas Kvietkauskas – the recent minister of culture, who in an interview outlines the specificity of Lithuanian culture, places of Lithuanian memory and oblivion, neighbourly ties, and also rereads the landscape of baroque Vilnius, the city of eternal movement.

Moreover, Nikodem Szczygłowski asks about the identity of contemporary Lithuania; Małgorzata Omilanowska, Bartosz Sadulski and Nijolė Strakauskaitė discover the Baltic Lithuania; Piotr Paziński recalls the heritage of Lithuanian Jews; Małgorzata Kasner, Adam Mazur and Dariusz Kacprzak talk about the Vilnius architecture, Lithuanian photography and painting; Maciej Topolski and Wojciech Stanisławski focus on Lithuanian literature and Dalia Staponkutė looks at her homeland from the Mediterranean distance, asking where and why she feels "at home".

The issue also includes the first Polish translation of Thomas Mann’s essay Mein Sommerhaus, dedicated to his summer home in the Curonian Spit. Mann writes: “The place made a deep impression on us. It exudes a surprisingly southern atmosphere. In summer, with the blue sky, the water of the lagoon is sapphire. It is like the Mediterranean Sea. There is a species of pine trees much like the Mediterranean stone pine. The white coast makes beautiful bends, you might think you are in North Africa. We spotted a hill on the coast and started flirting with the construction plot. At the time of our departure, our relationship became so solid that it was impossible to withdraw, even if we wanted to. With the help of local agents, we signed a lease agreement with the Lithuanian Forest Authority, an architectural office in Memel was engaged, and we built a wooden house by post. Everything was remarkably simple, just wood and varnish. The house was ready the following summer. We came and sat on the porch of our cottage as if it were the most natural thing in the world.”

On the margins of Lithuanian topics, the issue also includes an interview with Balázs Ablonczy, the historian managing the Trianon 100 research project on the centenary of the Trianon Treaty, and an essay by Miłosz Waligórski on an imaginary literary balloon journey from Novi Sad to Tallinn.

HERITO, nr 35: Europe and the East

HERITO, no. 8: Nations – history and memory

The new, eighth issue of the Herito quarterly devoted to nations in...
5.00 PLN
Add to cart

Each community devises specific modes of remembering, but also of...
5.00 PLN
Add to cart
×
added to cart:
continue shopping go to shop go to cart