Home Publications Bookshop Albums A world before a Catastrophe. Krakow's Jews Between the Wars 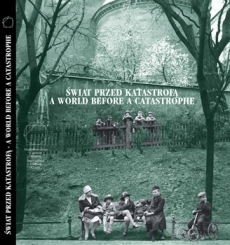 A world before a Catastrophe. Krakow's Jews Between the Wars

ISBN 978-83-89273-45-1
66.00 PLN
30.00 PLN
Add to cart
The book takes the reader on a journey into the past and reveals the fate of a people who have disappeared from the urban landscape. Over 200 pictures accompanying the detailed descriptions relate the story of pre-war Krakow and prove that its Jewish population were not only residents in Kazimierz, outsiders wary of assimilation, but citizens in their own right, contributing to the rebuilding of Poland after the First World War.

The catalog published on the occasion of the exhibition “The...
70.00 PLN
Add to cart

The woman's work is never done

The catalogue was published alongside the exhibition whose title...
30.00 PLN
Add to cart

Years of Disarray: Art of the Avant-garde in Central Europe...
10.00 PLN
Add to cart
×
added to cart:
continue shopping go to shop go to cart