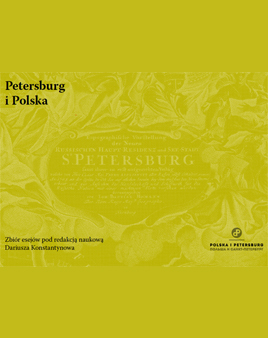 St Petersburg played a particularly important role in the history of Polish diaspora in the East. As an administrative centre of the multinational Russian Empire, and the Soviet Union’s and the Russian Federation’s second largest city after it ceased to be the capital, since the late 18th century St Petersburg has been an important background to the history and undertakings of many Poles.

Petersburg i Polska, a collection of essays edited by Dariusz Konstantynów, is a richly illustrated electronic publication issued by the International Cultural Centre within the frameworks of its online encyclopaedia Polski Petersburg. It presents the history, the numbers, and the social structure of the Polish colony in St Petersburg from the late 18th century to the 1930s.

The book discusses the role that for centuries Poles have played in the social, professional, economic, academic, cultural, and artistic life of the city on the Neva River. The publication provides a lengthy examination of the presence of Poles in the political life in Russia and St Petersburg and the fate of the local Poles during the period of great terror, as well as discusses Polish collections in the museums, libraries, and archives of St Petersburg.

The publication is available only in Polish.

Cracow in the European Core (ENG)

Nowhere is history of civilization and culture...

This anthology of essays by Claudio Magris will reveal to Polish...

Nowhere is history of civilization and culture reflected as...