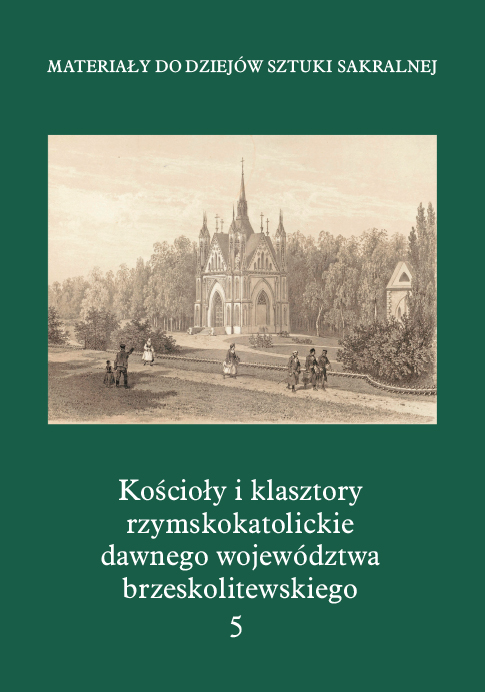 60.00 PLN
50.00 PLN
Add to cart
Volume five of the fifth part of the series Materiały do dziejów sztuki sakralnej na ziemiach wschodnich dawnej Rzeczypospolitej [Materials for the history of religious art in the eastern territories of the former Polish Republic] includes monographs of 19 churches and chapels in 17 towns located in the south-western part of the Brest-Litovsk Province, near Brest and Kobryn. More than half of the religious buildings in this area were destroyed, a few have survived and only several of them remained Roman Catholic churches. The former churches in Stawy and Wistycze are now Orthodox churches, so they still perform religious function and thus have retained the appearance similar to the original one.

Currently, all these places are located in the Brest Oblast of the Republic of Belarus, in the Brest, Kobryn and Drohiczyn districts (Zakoziel and Popina).

During WWII the churches in Zhabinka and Zaość were destroyed. By the decision of the Soviet authorities, the surviving churches in Antopol, Horodec, Popina and Dyvin were adapted for public use; churches in Zbirohy, Popina and Dyvin were ruined and then demolished, the church in Horodec was expanded and transformed into a school with a complete obliteration of the original architectural form, while the extended church in Antopol serves as a fire station (it is the only one with a still discernible original form).The preserved churches in Stawy and Wistycze were closed – now they are used as Orthodox churches. The neo-Gothic manor chapel in Zakoziel survived almost miraculously: this unused building, falling into ruin, was renovated the previous year. The second court chapel discussed in this volume – the chapel in Hruszowa – has not survived until the present day; it was destroyed together with the manor and the farm, probably after the war, when the property was taken over by the kolkhoz.The only one that was still active was the church in Kobryn, closed by the Soviet authorities in 1962, when some of its interior decoration, sculptures and paintings, were taken to the National Museum of Belarusian Art in Minsk, while the remaining elements of the interior were destroyed. After the collapse of the USSR, the parishes in Zhabinka and Horodec were reactivated, and new churches were built for their needs.

The volume contains studies of churches, monasteries and chapels...
30.00 PLN
Add to cart