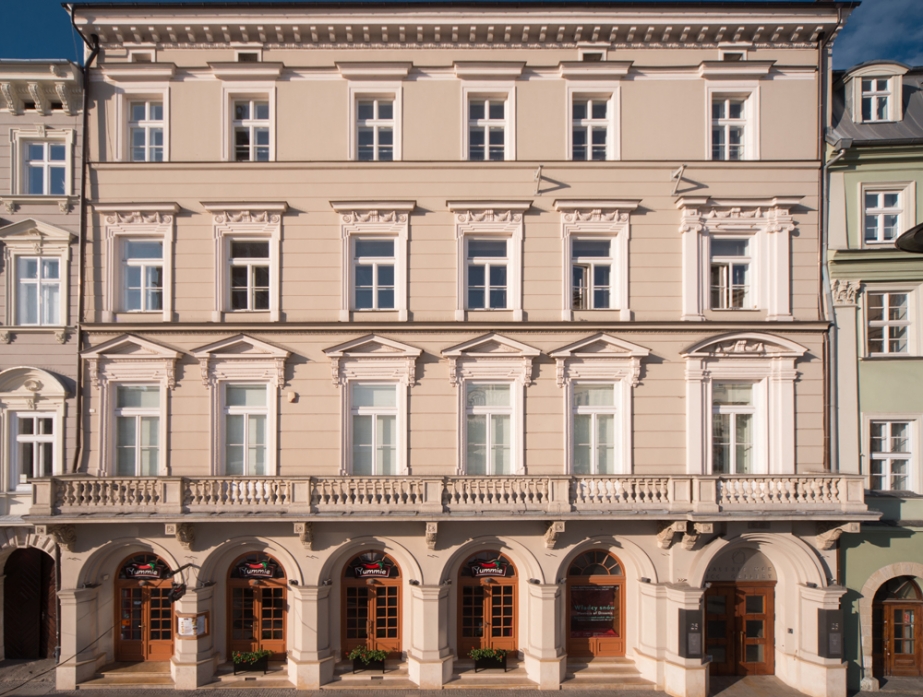 A-
A+
The International Cultural Centre is based in the Ravens House (“Pod Kruki”) at 25 Main Market Square (Rynek Główny 25), a witness of all the major events that have taken place right in the centre of Krakow over the ages. The windows which look into the Main Market Square and onto the Cloth Hall, representative of Renaissance architecture, and the Gothic-style Town Hall Tower, also made it possible to view the Prussian Homage (1525), the Kosciuszko Insurrection (1794), Józef Piłsudski’s funeral procession (1935), enthronements, homages paid to kings, carnivals, parades, popular assemblies, state ceremonies, but also riots, demonstrations and revolutions (1846, the 1848 Springtime of the Peoples, or the martial law of 1981).

The house itself has had a number of functions: an aristocratic palace, Krakow’s social salon, the starost’s office, a bank, the NSDAP headquarters for the General Gouvernment, and, subsequently, a Committee of the Polish Workers Party, a publishing house, a school dance, a bookshop, and since 1991 the home and showcase of the ICC.

The history of the Ravens House goes back to the time when Krakow was granted Magdeburg rights in 1257, although it was given its current shape in the 19th century, when two medieval townhouses were combined into one. The earliest history of the building is represented by a maze of Gothic basements, and the Renaissance period by the preserved wooden ceiling of the entrance hallway and the Tuscan column on the first floor.

Towards the end of the 16th century Stanisław Szafraniec, the Sandomierz Voivod and the building’s owner at the time, turned the Ravens House into his city residence. The evidence for the building’s glorious past can be encountered in the Gothic Cellars, while the wooden ceiling of the former backroom and the Tuscan column discovered on the first floor of the Kłosowicz House during restoration works are the remaining pieces of evidence of prosperity during the Renaissance period. In 1842, Anetka Potocka-Wąsowiczowa, née Tyszkiewicz, the granddaughter of Kazmierz Poniatowski, the king’s brother, acquired both the Ravens House and the adjacent Kłosowicz House, integrated the two tenements and transformed them into a representational town palace adorned with a stone balcony on the first floor. In 1844 the residence was handed over to her son Maurycy Potocki. Count Maurycy, an uhlan officer in the November Uprising and a member of the National Committee, did not enjoy his residence for long. The July fire of 1850 devastated one-third of Krakow’s city centre, including the houses in the south-western corner of the Main Market Square.

Stanisław Gołębiowski, one of the first promoters of Neo-Renaissance in Krakow architecture in the mid 19th century, was a well-known builder who supervised the renovation project following the fire. In 1853, soon after the Ravens House was rebuilt, it was rented out to the Circuit Office. In this way, after the city’s incorporation into the Habsburg Monarchy, an aristocratic residence became the seat of the Austrian Starost and his subordinate administrative units in Krakow.

In June 1869, the Galician Bank for Trade and Industry was set up in the Ravens House, the first institution of its type in Krakow. The renovation works were supervised by Tomasz Pryliński, the future author of a re-design project of the Cloth Hall who is believed to have given the façade of the Ravens House its characteristic shape. A Neo-Renaissance edifice was arranged to have an operation room supported by cast-iron columns produced in Ludwik Zieleniewski’s first machine factory in Krakow on the ground floor. The institution was also ‘armed’ with a specially constructed vault. Modernising ambitions of the first Polish bank in Krakow and its conservative owners was the illumination of the Ravens House with electrical lights. In September 1880, Krakow’s first try at electrical lighting took place on the occasion of Franz Josef I’s visit to Galicia. From 1919, the Ravens House was the property of Bank Małopolski which continued the operations of its Galician predecessor, now as a listed company. The post-war period of fake prosperity and growing inflation was used by the institution to expand its seat. In 1921, a third floor was added which was followed by three-storey annexe building of a reinforced concrete frame to be erected a year later. The work was supervised by Teodor Hoffman, a well-know Krakow architect.

During the World War II, the Ravens House became an NSDAP headquarters for the Generalgouvernement. So as to adapt the building to its new functions, the courtyard gave place to a new conference room and the fourth floor was added to the annexe building.

The Ravens House enjoyed its renaissance in the 1990s when – as the home of the ICC – it underwent a two-stage redevelopment designed by the Krakow-based architect Romuald Loegler. Between 1998 and 2005, the front building was redeveloped and modernised, including the Gallery on the first floor, which was fitted out with modern technical infrastructure, and the Ravens Conference Complex was created. In 2006–2008, the courtyard annexe was adapted to meet the ICC’s needs, by addition of the Panoramic Room with a glass roof and a view terrace, and a glazed Patio was built on the roof of the conference room to extend the conference complex and obtain additional exhibition space. This is how the facility occupied by the institution became fully integrated with its programme.

The history of the house and its redevelopment is described in more detail in the book 25 Main Square. A History of an Address.